Bob Dylan, one of the most iconic singer, songwriters of our era, is cashing in. Today it was announced that Dylan was selling his song library to Universal Music Group for upwards of $200M (some are reporting closer to $300M). With more than 600 songs spanning a career of nearly 60 years, Dylan’s prolific contribution to folk, pop, and rock music is unmatched. You don’t have to take my word for it: Dylan is the only songwriter in history to win a Nobel Prize for Literature, “for having created new poetic expressions within the great American song tradition.”

It does seem counter-intuitive that the counter-culture icon would sell out to a corporate media conglomerate. Universal Music Group is owned by French media oligopoly Vivendi. According to NPR, “[the company] will collect money any time another musician covers any of those songs, and it will earn revenue for allowing the songs to be used in commercials and movies as well as when the songs are streamed, sold commercially on such formats as CDs, or broadcast.” But Dylan has always resisted labels…even the label of non-conformist.

Again according to NPR, citing Universal, “Dylan’s songs have already been recorded by other artists more than 6,000 times, including such famous versions as Jimi Hendrix’s cover of ‘All Along the Watchtower‘ and Guns N’ Roses’ version of ‘Knockin’ on Heaven’s Door.‘”

You may not be familiar with the ’70s rock legends Led Zeppelin or the song Stairway to Heaven, but you’ve probably heard some version of it from a friend who was learning to play guitar. The classic rock ballad was released in 1971 and was inducted into the Grammy Hall of Fame in 2003.

According to Variety, “The Zeppelin case began in 2014, when journalist Michael Skidmore filed suit on behalf of the estate of Randy Wolfe, the late frontman of the band ‘Spirit.’ The lawsuit alleged that the iconic opening instrumental riff in ‘Stairway to Heaven’ was lifted from Spirit’s 1968 song ‘Taurus.’”

Now that that distraction is behind us, take a minute and enjoy Ann and Nancy Wilson of Heart and their version of Stairway to Heaven, performed live at the Kennedy Center on Dec. 2, 2012. You can thank me later.

The hack of Sony Pictures and subsequent release of salacious emails and other confidential information has been the talk of the town (read Hollywood) in recent days. Much of the information obtained by the hackers (aka Guardians of Peace) is very personal and potentially damaging to careers and reputations of employees, executives, and celebrities connected to Sony. Medical records, compensation packages and their private negotiations…even jokes about President Obama that have a racial component…are on display for all to see.

But the hackers alone cannot do serious damage to Sony without the willing participation of journalists. What the hackers have stolen, journalists are now distributing with the protection of the first amendment and the claim that these are important and relevant issues to be discussed in a public forum.

But not every one is willing to give the news media a pass when it comes to reporting this story. Appearing on Howard Stern’s radio show, Seth Rogen (co-star of The Interview) claimed that journalists are profiting from doing exactly what the criminals/hackers want.

Television writer Aaron Sorkin has been another outspoken critic saying, “Every news outlet that did the bidding of the Guardians of Peace is morally treasonous and spectacularly dishonorable.” Sorkin acknowledges, in his op-ed piece in the New York Times, the importance and role of the media when it comes to whistle-blowing and exposing wrong-doing, e.g. the Pentagon Papers. But he makes a clear distinction between that and these gossipy morsels that have little or no value for the preservation of democratic ideals.

I suppose one could argue that this hack reveals facts relevant to issues of importance: gender disparity for celebrity compensation, race-tinged jokes about the President by Sony execs who support him and gave to his political causes, and allegations of journalistic malpractice by New York Times columnist Maureen Dowd. But these exceptions are not what’s generating all the buzz on blogs and social media.

Not too long ago when nude celebrity pictures were hacked from the cloud “real” journalists were careful to keep their distance for fear of being seen as accomplices to the crime. But this time the “gift that keeps on giving” has fewer detractors and the benefit of readers’ fascination with celebrity culture. The hackers have promised a “Christmas gift” of new information while Sony’s lawyers are sending threatening letters to news organizations in an attempt to discourage further dissemination. But if there’s one thing on which we can be fairly certain, it’s that attacking journalists won’t go over well. 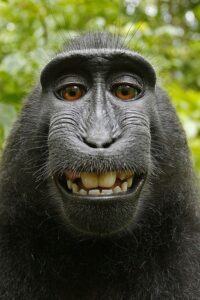 Perhaps you’ve seen this picture of a female Celebes crested macaque. The picture is unusual in several ways. First, the expression is priceless. To peer into the soul of a subject and capture it on film in such a powerful way is truly amazing.

But that brings us to the second way in which this photo is unusual. It is a selfie. That’s right, the photo was taken by the subject. According to an article on the Mashable website, the photographer David Slater was on a trip through the jungles of the Indonesian island Sulawesi in 2011 when he had his camera swiped by the macaque who then turned the camera on herself.

Okay, pretty interesting story so far, but it gets better. Several years later someone uploaded the photo to Wikimedia Commons. Slater, who claims copyright on the photo, asked Wikimedia to remove the photo. Wikimedia denied Slater’s request claiming that Slater did not own the photo since he didn’t take it.

according to Wikimedia’s licensing report, it remains in the public domain “because as the work of a non-human animal, it has no human author in whom copyright is vested.”

There you have it. Once the courts settle this case we’ll know whether animal selfies enjoy the protection of copyright. And what if the courts say that the copyright belongs to the critter who pressed the shutter? In the US, copyright is awarded for the life of the author plus 70 years. If a Giant Galapagos tortoises snaps a selfie it could remain under copyright for upwards of 250 years!

UPDATE, April 24, 2018: The court has ruled, and the monkey cannot make a copyright claim. Okay, you can go back to your monkey-business as usual.